The most important companies 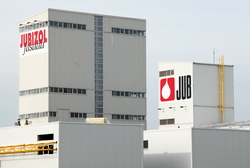 Pecinci Municipality has become a leader in recruiting investors and a high quality labor market thanks to its good geographical and traffic position, close proximity to the capital and its one million consumers. Namely, Pećinci Municipality is only 25 km away from Belgrade and 15 km from the international airport "Nikola Tesla". The European Corridor 10, i.e., the highway E 70 goes through its northern part.

Pećinci sugar factory -”Nord Zucker” has been privatized. After privatization the factory increased its production capacities.